I think I’ve cried at every single episode of This Is Us. But the latest was something else altogether. Because, this was us.

If you’ve not watched it (you really should) it’s about an American family, the Pearsons, spanning about 40 years of their lives, zooming in and out of their stories, hopping and skipping through the decades, un-skinning old wounds and unravelling what it means to be a family. It’s shamelessly sentimental. But beautiful, too.

If you plan to watch it – or you have watched it, but aren’t up to date (UK time, streaming on Amazon, Season 2: Episodes 8 and 9) fair warning, this post contains spoilers. 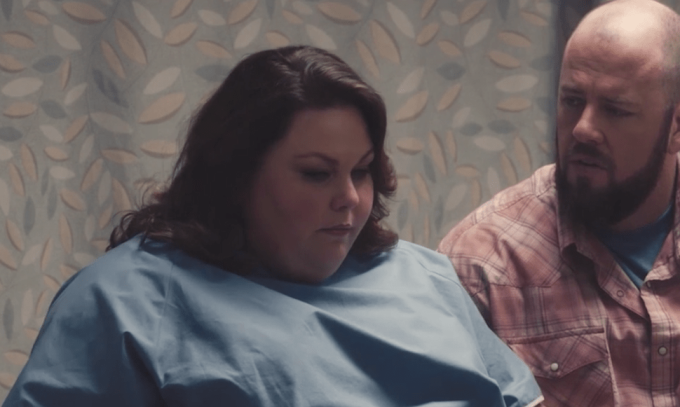 Last week’s episode, Season 2, Episode 9: ‘Number Two’, was about miscarriage – Kate and Toby lose their baby, fairly early on – and I’ve been thinking all week about the things it got right, where TV depictions of miscarriage often don’t. And why that matters.

The first thing to say is that it’s somewhat surprising they included a miscarriage storyline at all, given that the jumping-off point for the show is that Kate’s parents, Jack and Rebecca, lose a baby – Kyle, one of their triplets, along with Kate and her brother Kevin – during labour. And this leads them to adopt another newborn, abandoned on a doorstep that same day and brought to the same hospital.

Baby loss is already built into the foundations of this story, so including a miscarriage several decades later, breaks all the usual rules of ‘issues’ writing. So often in popular culture a miscarriage is an isolated incident. If it happens at all, it happens once in a series. To one character. And definitely not too close to any other messy, bloody, birth-y, women’s bits and bobs and thingumajigs.

As if piling loss on top of loss wouldn’t be ‘believable’. As if that were the way it worked in real life, like there’s an allotted quota for this stuff.

(The reality, as I’m sure you know if you’re here reading this, is it’s all too believable for these things to occur in the same family. For the same person to face a pick’n’mix of infertility, terminations, ectopic pregnancies, multiple miscarriages, stillbirth, neonatal death, traumatic birth, post-natal depression….)

No. So much about the This Is Us miscarriage felt real, especially compared to other TV representations. It didn’t happen off-screen, but equally there wasn’t an ominous patch of blood on a cocktail dress, or sudden collapse, no one fell off a horse or was in a car crash, and a (male) character actually used the words ‘we’ve had a miscarriage’. Not a euphemism. No ‘we lost it’ or ‘it just went away’.

‘We had a miscarriage.’

Even to me, your friendly local miscarriage correspondent over here, it was jarring to hear those words out loud.

And there were other touches that made this, at times, painfully real. (Dan and I watched it together, and there were several moments one of us paused it to check: ‘are you OK?’, ‘is this OK?’, ‘do you want to carry on?’.) When Kate says to Toby ‘I feel like I’ve failed you’. Or when Toby has the sickening, swooping realisation that a fancy Swedish baby bath they’d ordered pre-miscarriage is due to be delivered the next day ‘making everything so much worse’. 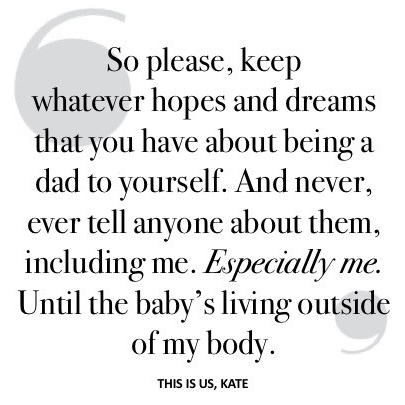 Ending this pregnancy wasn’t just a plot device, there was real interest in getting under the skin of how this feels; what it does to people. Like Kate refusing, at first, to wallow on the sofa watching old sitcoms, insisting instead on going to work. And then, set against that, Toby – the world’s most well-adjusted man – at an utter loss of what to do to make it better.

But, for me, the most important moment was one that passes between Kate and her mum Rebecca. Rebecca has turned up at Kate’s door and is trying to get her to open up about what has happened. Kate says: ‘How can I be this sad? I never even met the baby. Never held him – or her… wasn’t even old enough for me to know.’

And after a breath Rebecca’s reply is simply: ‘I never held Kyle’.

There is something so powerful about the fact that in a conversation between two women who have both lost babies – in very different ways, at different stages – the writers chose to highlight what they have in common, not how their experiences diverge.

In the scene you sense Kate’s awkwardness, an aura of doubt that her grief somehow doesn’t count. Something Rebecca deftly deflects, saying: ‘From the second I found out I was pregnant with you guys, you were all so real to me.’

This doubt, this internal ranking system of our experiences of loss, is something I think many people struggle with, particularly with early miscarriage. I certainly did when I first started writing about us and discovered that there was a whole online community sharing stories of baby loss. Because after that first warm rush of recognition, of connection, came shame. Was I ghoulish, weak, attention-seeking for even thinking of what had happened to me in similar terms to those who had had twice, three times as many miscarriages, who had lost their baby at term or had to take them off life support at several days old? Who was I to complain, to hurt, by comparison?

But – and I hope this isn’t offensive – I try very hard not to think this way any more. This is not the Grief Olympics, after all. Imagining there is some sort of baby loss hierarchy is ultimately a path to nowhere.

I am not for a second arguing that what we go through is identical. There are important nuances. Different losses come with their own particular challenges, will need different support. And, yes, someone who has one early miscarriage may well recover (I won’t say ‘get over it’) far quicker than someone who loses a baby at term, the date of their child’s funeral forever marked on a calendar held in their heart.

But, ultimately, what do we gain by pushing people away because they cannot understand everything, when we could still find something?

In the scene between Kate and Rebecca, Kate – in response to being told emphatically by Rebecca that what happened wasn’t her fault – replies: ‘But with me, it’s different. Maybe it was my fault.’

Quick as a flash Rebecca fires back: ‘Maybe it wasn’t’. The subtext being: ‘Maybe we’re exactly the same.’

And that for me is always going to be the kinder question to ask – of yourself and of others, especially when you find yourself bristling, thinking pricklish-ly that they couldn’t possibly understand. It’s not how are we different, but how are we the same.

Those core emotions: disappointment, shame, guilt, emptiness, anger, absence, fear… This is pregnancy loss. This is how it is. And this is why we need each other.