I recently finished Michelle Obama’s autobiography. I bought it in its first week – along with literally a million other people. It is an incredibly warm, wise book – a book that says so much about womanhood, race, love, grief, marriage, privilege and, yes, politics. It’s full of lines that have you nodding along, thinking ‘yes, yes, that’s exactly how it is’. The passages where she describes miscarriage are no exception:

‘If I were to start a file on things nobody tells you about until you’re right in the thick of them, I might begin with miscarriages. A miscarriage is lonely, painful, and demoralising almost on a cellular level.’

Nod. Nod. Nod. Despite the headlines ahead of publication though, Michelle’s experience of miscarriage and infertility amounts to a very small section of the book, barely more than a few paragraphs. At first, I was disappointed by this (that sounds ghoulish and self-centred, I know) as I really do believe we need more diverse narratives, more honesty, on these subjects – and in the mainstream – but, actually, by the end of the book the proportions of it all made me feel hopeful. It made me pause and think that, however important and agonising on a cellular level right now, this particular chapter of my life – and yours – will hopefully one day seem like a really rather brief verse in a great, soaring ballad; a mere snag in life’s rich tapestry. OK, Michelle’s life took an extreme swerve on to the world stage, but I like to think this sense of scale should still apply for the rest of us.

Something to think about, anyway. 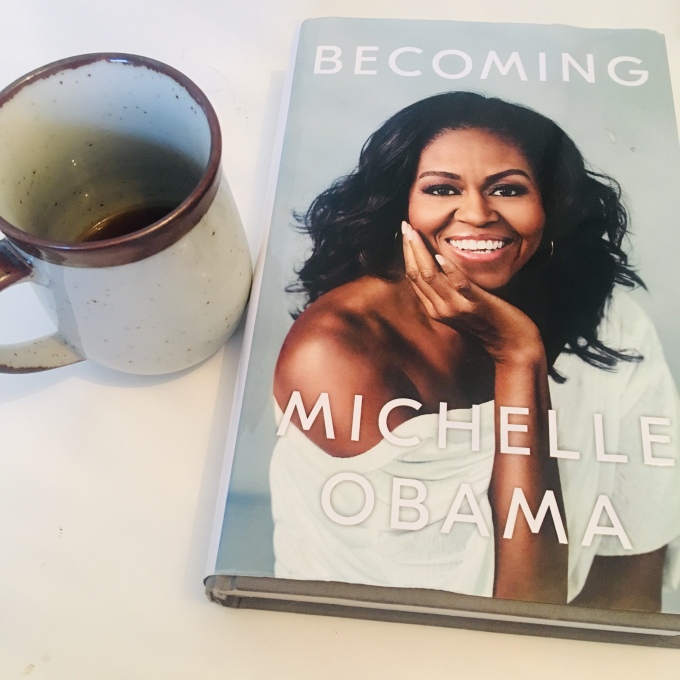 Also, as I promised on Instagram, here’s something I wrote for Grazia a couple of weeks ago about the importance of breaking our silence on miscarriage, as Michelle did:

The silence around miscarriage invalidates the grief you feel

Until I was standing in the corridor of my local hospital, out of hours, bleeding through my jeans a few days short of 12-weeks pregnant, I had no idea what a miscarriage would be like.

I had no idea how much it would hurt, or that the cramps would come in waves, like the beginnings of contractions. I had no idea I would go on to pass a recognisable embryo – smaller than a chicken’s egg.

So much blood for such a tiny thing.

I’m sorry if this is graphic, but what happened to me was graphic – and frightening. And it was made more so by the fact I had no framework for it; I didn’t know what was normal, if I was normal.

Naively, I think I assumed a miscarriage meant you just stopped being pregnant.
I had no idea you can bleed for weeks afterwards, and that you have to take a pregnancy test once it’s stopped to confirm the pregnancy is definitely over and that surgery isn’t needed to remove any ‘retained tissue’. It’s a cruel, final twist – the sad, solitary line in the test-window under-scoring a deep sense of failure.

Why, I remember thinking the day I miscarried, as I got home and peeled off the hospital-issue paper pants, did I not know any of this? Why had I heard so many friends’ birth stories – the good, the bad, the ‘I’m so sorry, I think I’ve done a poo’ ugly – and yet I’d never heard about anyone’s miscarriage?

Since that first miscarriage, nearly two years ago, I’ve had three more, all in the space of 18 months. It’s something I could never have anticipated – that our attempt to start a family would so quickly become suffused with a fog of grief as we racked up due date after due date that came and went without a baby. I still haven’t managed to carry a baby to full term.

Recurrent miscarriage – more than three in a row – affects one in 100 couples. But one in six pregnancies will end in a miscarriage. And one in four women will have at least one in their lifetime. I remember the first time I read that statistic thinking: OK, so where are they all?

So I wasn’t surprised to hear Michelle Obama talking about how the miscarriage she had before her daughters Sasha and Malia were born left her feeling ‘lost and alone’ because ‘we don’t talk about them’. Instead, she said, ‘We sit in our own pain, thinking that somehow we’re broken.’

I know that’s what I did. The first time, hardly anyone knew I’d been pregnant. I didn’t know how to say: ‘I was expecting a baby, and now I’m not’. So I said nothing.

But we need to find the words. Because miscarriage is a strange, furtive club – and it’s only when you raise your hand that you discover how many members you know.

Still, it would be helpful if we heard about it before we even try for children – certainly in early pregnancy. It needs to be normalised to the point where people have a sense of how it goes, how it looks, feels, hurts, before it’s upon them – before they’re literally banging down the hospital doors, wondering which department to show up at.

I recently read back through my folder from my first pregnancy, given to me at the initial midwife appointment. Sifting through the reams of information there is just one small paragraph on miscarriage – roughly the same number of words are devoted to answering the question: ‘Will my stretch marks last for ever?’ The word ‘miscarriage’ appears elsewhere, of course, but always in the context of reducing or raising your risk. The picture painted is that if you do everything ‘right’ miscarriage is unlikely to touch you.

And yet, a miscarriage can be traumatic physically and emotionally, and the sense of loss can be profound – as can the mental health after-shocks. It has been linked with depression and anxiety that can last for years afterwards, according to 2011 research published in The British Journal Of Psychiatry. Another study from 2016 found four in 10 women who have a miscarriage or ectopic pregnancy display signs of post-traumatic stress disorder afterwards.

If you encounter only silence when it happens to you, it gives the impression that it’s no big deal – that it’s not worthy of frank discussion at ante-natal appointments. And this makes you doubt whether you have a right to feel the way you do. That you’re guilty of histrionics. Just making a fuss.

We don’t have to shout about our miscarriages from the rooftops – losing a pregnancy is an incredibly intimate thing. But, if we can, we need to try to open up.

To offer reassurance that a miscarriage is, sadly, normal and in no way a fundamental failing of your female-ness. Because, as Michelle put it: ‘It’s the worst thing that we do to each other as women. Not share the truth about our bodies and how they work – and how they don’t work.’