‘Isn’t she beautiful?’ the advert asks. The subject of its question smiles out at me. Luminously lit in black bra and leggings, she holds her tiny baby close to her face, hands circled firmly around its back, as one pudgy leg dandles down, nudging the soft camber of her stomach, which is rippled with purple stretch marks.

Yes is my answer. Yes, she is beautiful.

This is Mothercare’s new Body Proud Mums poster campaign, which launched on the London Underground last week, and it is undeniably a beautiful, powerful thing.

And yet it makes me feel small.

I’ve written about how I felt about my body after miscarriage before – in fact, it was one of the first things I ever wrote for this blog. The little extra pinch of salt in the wound, the post-baby weight when there’s no baby.

In the last six months or so, I have worked quite hard at making my body feel like my own again. Running more has helped, as has regular yoga, and losing a little (probably imperceptible to anyone else) bit of weight. And yet after four pregnancies – albeit short-lived ones – there are changes that persist. A more insistent roundness to my lower stomach. Breasts that are a little larger and (sigh) lower. I won’t exaggerate for the sake of sympathy, the difference is not vast or dramatic, but I know it and notice it.

We don’t hear enough about post-baby loss bodies. The uterus grows from the size of a small orange to the size of a grapefruit in the first trimester alone (sorry for fruit analogies…why is it always fruit??). You can gain half a stone and breasts can go up a couple of cup sizes even before a pregnancy is public knowledge. A pelvic floor will be just as pummelled if it carries and then delivers a full or close-to-term baby that never takes a breath.

Yet the physical realities of loss – at whatever stage – are far from well understood (as I wrote about here for Grazia magazine). People are surprisingly naïve to the possibility that a woman who has a late miscarriage (anything between 16 and 23 weeks) or a stillborn baby will often have to deliver her baby vaginally. That even an early miscarriage can require surgery, under general anaesthetic. That if you miscarry spontaneously you may deliver something that is recognisably a foetus.

Pregnant women approaching their due date often joke that ‘it has to come out somehow’…well, to be blunt, the same is true even if your baby dies.

So what has this got to do with Mothercare? Maybe nothing. It would be silly and pointlessly argumentative to expect the invisibility of these kinds of post-baby bodies to be fixed with a single poster campaign. And besides, Body Proud Mums is addressing another specific – and very real – problem, namely that there is a huge gap between how many mums feel they should look post-birth and how they actually look. I am by no means dismissing this.

But. But, but, but…  I do worry that the campaign feeds into a conversational trope I’ve noticed cropping up more and more – on social media, in throwaway lines from new mums – that goes something like this:

‘My body may not be perfect, but it gave me my babies/kept three humans alive/grew a whole new person’.

I know it seems harmless, a resounding body-posi feminist roar, rejoicing in what ‘real’ women look like, and what their bodies can do. But, to me, it risks making mumbods the single exception to the rigid rule of impossible beauty standards. You can be proud of your round stomach, stretchmarks and yes-I-will-need-to-wear-a-bra-with-that-thanks boobs, providing you created a whole other person. But if and only then. If you didn’t, the unwitting subtext is, well, what’s your excuse?

Of course women who have given birth should feel justly proud of their bodies. What bothers me is the implication this is the only permissible condition under which women can be publicly proud of less than perfect bodies; to be kind to them, to let themselves off the hook.

‘I grow humans, what’s your superpower?’

‘My body made a brand new person, so it’s not doing so badly, I suppose.’

There is nothing wrong with saying any of these things per se (although they do sting a bit when you cannot join in). The problem is that we don’t make allowances with anything like this sort of fanfare for any of the other myriad traumas that might mean a body no longer looks the way it used to: be it pregnancy loss, repeat surgeries for endometriosis, punishing rounds of IVF, plain old comfort eating through grief, chronic illness, weight gain related to anti-depressants, or living off of hospital vending machine snacks for weeks while you attend the bedside of someone you love.

Despite what we’re sold, how a body looks is not a simple, rational equation of number of sessions in the gym plus cake uneaten. There are so many variables and unknown factors to its algebra that make it an unpredictable, sometimes unsolvable theorem.

And here’s the kicker – for some of these variables, it is just not possible to slap a body positivity band-aid on it. There is no quid pro quo here. No happy trade-off for the little extra roll of fat left around my bra strap. I cannot celebrate the changes to my body that are so tightly bound with loss, pain, anxiety. Even if, somehow, I can get to a point where I feel positive about how my body looks now, I cannot see how I could ever get to a point where I would feel positive about what has happened to it.

It’s just a body. It doesn’t need to be made a temple to my successes nor a mausoleum of my failures.

In such circumstances, expecting women to believe they’re beautiful, to celebrate every inch of their non-supermodel bodies feels like an impossible double-bind.

Which is why instead of body positivity, as per the Mothercare ads, I think it’s more helpful to aim for body neutrality. This is the idea that while you may not actively love the way you look, you don’t have to hate your body for it either.

It’s just a body. It houses me. But it isn’t who I am. It doesn’t need to be made a temple to my successes nor a mausoleum of my failures. 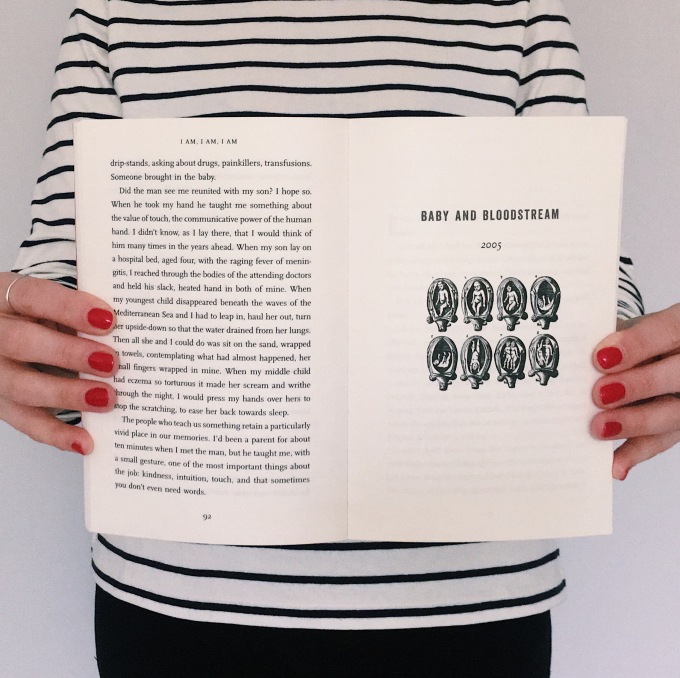 Every time I’ve miscarried, in the initial few days and weeks as I started getting back to normal life, I’ve felt intensely paranoid that someone would see my stomach – still swollen from hormones or post-surgery bloat – and mistake me for pregnant, offering me their congratulations or their seat on the Tube.

After my fourth miscarriage, my worst fears came to life. I was stood in the coffee queue in my office building and got chatting to a man I used to work with. ‘I didn’t know you were expecting,’ he said brightly. ‘Congratulations!’.

I should have just made a joke. I was wearing a rather sack-like dress, after all. But I didn’t – I couldn’t. The only thing my numb brain could think to reach for was the truth (this was Tuesday morning, and I’d had an ERPC on the Friday).

And then I made a bad situation worse by crying.

All day I tortured myself with this apparent evidence that I still looked pregnant – but wasn’t. As if it were some mortal sin. Every time I glimpsed my reflection I tried to convince myself otherwise. I looked fine. It was just the dress. The way I’d been stood, arching my back to reach into my handbag for my KeepCup. He was wrong, insensitive. Besides, everyone knows you don’t congratulate a woman who hasn’t told you herself that she’s pregnant, unless she is literally crowning.

Until something clicked into place. Maybe I did still look pregnant. And maybe that was fine. Three days ago, I had been pregnant. That was a fact. If I still looked pregnant, then this was surely normal, natural, logical. This wasn’t a comforting thought exactly, but viewing it like that – neutrally – was enough to quiet down that background chatter in my brain. I didn’t need to feel proud, I didn’t need to love how I looked, I just needed to accept the facts. And let my body off the hook accordingly.

It had been through enough, after all.