I wrote this for a newspaper a week or so ago, but thought I’d share it here, too, in case any of you missed it. I tried to unravel the many complex reasons women often feel they can’t take even a single day out after – or even during – a miscarriage. Please do share your own experiences in the comments. When I tweeted a while back about carrying on as normal, despite knowing you’re losing a baby, so many others replied to tell me the various improbable-sounding things they’ve done during their miscarriages – and seeing all those experiences in one place was one of the most powerful things I’ve ever read. There are so many of us doing this, more than most people realise, and so it felt really important to me to stop and question why this is (and what we can do about it)…

A balmy Bank Holiday weekend and six adults and two small children sit down to an al fresco dinner.

At the bottom of our garden, under the magnolia tree, a table groans with salads and stacks of bread. The prosecco is popped. My husband Dan, sporting an apron emblazoned with Barbecue King, brings over the burgers. It is perfect. There is just one small, off-kilter detail. I am perched on a tatty beach towel, just in case I bleed over the new patio furniture.

Because, you see, as well as hosting a Bank Holiday barbecue, I happen to be in the middle of a miscarriage. We smile, we clink glasses, we make small talk about the sausages. And all the while, Dan and I know we are losing our baby. The tiny new life we hoped for is ebbing away and there is nothing we can do about it. 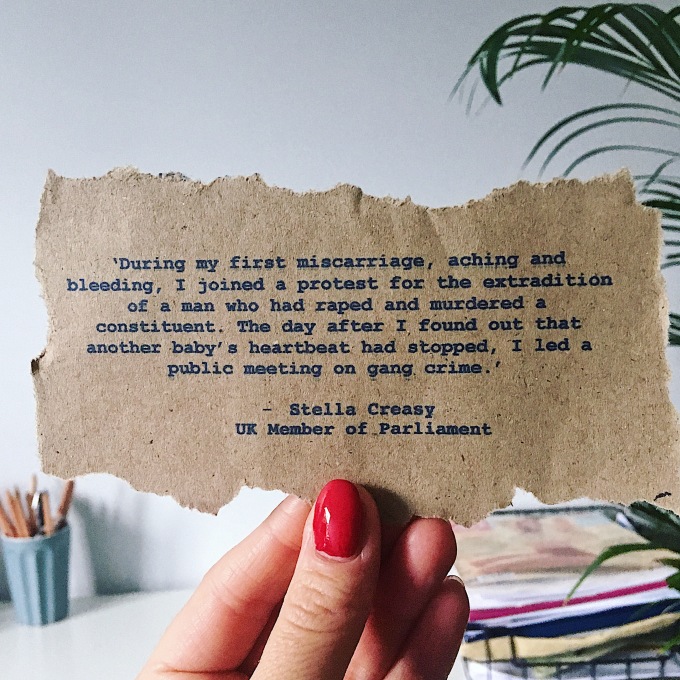 It is the second time in five months this has happened to us. The miscarriage had been diagnosed that morning. I was eight weeks pregnant and had started spotting — though only lightly. But a quick ultrasound scan ‘just to make sure’ came up still and black and so we were sent home to let nature take its course. Dan and I stepped out of the maternity unit into dazzling spring sunshine but, for us, the world felt very grey.

So why were we playing at dinner parties that same evening, as if nothing had happened?

I know how weird it must seem. Macabre, even. But the reality is, this kind of thing happens a lot more than you might think.

This week, highlighting the absence of maternity rights for members of Parliament, Labour MP Stella Creasy described how she felt she had no choice but to carry on working through two miscarriages.

‘During my first miscarriage, aching and bleeding, I joined a protest for the extradition of a man who had raped and murdered a constituent,’ she wrote. ‘The day after I found another baby’s heartbeat had stopped, I led a public meeting on gang crime.

‘I even scheduled the procedure to remove the body on a day I didn’t have a constituency advice surgery.’

Earlier this year, The One Show presenter Alex Jones revealed in a magazine interview that she was back on TV an hour after having been told she’d had a missed miscarriage (where the baby dies, but for some reason a miscarriage doesn’t start straight away).

None of this strikes me as remotely odd or surprising. Whenever I hear such a story, I just think: ‘Yes, that’s exactly how it is. That’s what you do.’

I’ve had four miscarriages in two years. And while I can’t say I’d have been able to appear in front of millions on national TV like Alex, or to address a crowd like Stella, I do recognise that instinct to carry on regardless.

Accordingly, Dan and I have taken ourselves to the cinema while I’ve been miscarrying (suffice to say, neither of us thought much of La La Land). I’ve baked an elaborate birthday cake and then sat, still bleeding, through a dinner at a fancy restaurant.

I’ve hit the John Lewis sales with my mum the day afterwards (and stood dazed in the changing rooms, transfixed by the stranger in the mirror — her face pale and bloodless; stomach still swollen and sore).

I’ve had surgery for a missed miscarriage on a Friday and been back in the office on Monday. After my fourth loss, I kept a long-standing appointment to take part in a government review into early pregnancy loss care. The irony was not lost on me.

I’m not saying any of this to show how ‘brave’ I am — quite the opposite. I’m telling you precisely because none of this is exceptional. In fact, I’d go so far as to say it’s happening every day, up and down the country. It’s probably happened right under your nose — and you wouldn’t necessarily have a clue.

It’s estimated that one in five pregnancies end in miscarriage and one in four women will have at least one in their lifetime. But I’m prepared to bet you haven’t had a conversation with one in four of all the women you know along the lines of: ‘I’m so sorry, I can’t make the party/dinner/meeting/school play because I’m miscarrying.’ In fact, have you ever had a conversation like that?

When the last series of BBC show Fleabag showed a character miscarrying in a posh restaurant toilet then going back to the table as if nothing had happened, some viewers complained it was crass and that no one would really behave this way.

Yet after I posted on Twitter saying the scene rang true for me, I was inundated with responses from other women.

Women even confided in me that they’ve miscarried on their own wedding day.

There’s no doubt we women are made of stern stuff. And, admittedly, a miscarriage is an intensely intimate loss that not everyone will want to talk about. But you do have to question whether such a strict omerta is healthy.

‘A miscarriage can be an incredibly painful experience,’ says Jane Brewin, chief executive of charity Tommy’s, which funds research into miscarriage and stillbirth.

‘It can be physically painful, but more than that there is really good evidence now that the psychological impact can be incredibly severe — and persistent. The facts show that miscarriage is something we should be taking incredibly seriously.’

Numerous studies have shown elevated levels of stress, anxiety and depression are common after miscarriage, including one 2016 study by Imperial College London that found four out of every ten women who’d experienced early miscarriage showed signs of PTSD such as flashbacks, intrusive thoughts and nightmares at least three months later. Another, published in the British Journal Of Psychiatry in 2011, found symptoms such as depression and anxiety can continue for years.

So why do we feel so sworn to secrecy that we’re reluctant to take even a single morning off? Why don’t we feel able to pause, even for a day, to process the grief we feel?

‘I think women carry on as if nothing has happened largely as a result of shock,’ says Julia Bueno, a psychotherapist and author of a new book, The Brink Of Being: Talking About Miscarriage, and who herself sat through a therapy session with a client while miscarrying.

‘We go into that fight-or-flight survival mode — and we’re staggeringly capable of doing things in the face of adversity.’

Then there’s the convention that you don’t reveal a pregnancy until after the first three months, when the risk of miscarriage is highest.

‘Unlike a later loss, where people already knew you were pregnant, you have to decide whether you make that very private experience public — and in doing so you mark your card as someone who is trying to get pregnant,’ says Julia.

Disclosure is doubly difficult in the workplace. Even now, it is a naïve person who thinks that having children won’t affect a woman’s career and as a result few women broadcast that they are trying to conceive.

‘I think there is a fear other people will react badly or, at worst, that you will be discriminated against if you are open about it,’ agrees Jane Brewin. ‘But if more people did say something it would help employers to get better at managing what is a common — but distressing — experience.’

Katy Schnitzler, a researcher and business consultant who is writing a PhD on miscarriage and the workplace, adds: ‘In the workplace, there can also be a reluctance to admit to anything that will make you seem unpredictable and unreliable.’

A lingering sense of failure around miscarriage also makes it difficult to admit to, and a peculiar defiance can kick in.

‘I might not be having a baby, but I am bloody well having this barbecue’

That Bank Holiday weekend, I remember thinking that however devastated I was, I wasn’t going to let it ruin all my plans: I might not be having a baby, but I am bloody well having this barbecue.

We told our friends — who were staying for the weekend — the truth. In what felt like a cruel twist, the night before we’d broken the news that I was pregnant, knowing they’d guess anyway when I didn’t join them in a glass of wine.

They offered to give us privacy, but we insisted they stay. As Alex Jones so poignantly put it: ‘There’s nothing to say. It’s done.’

There is another crucial factor though, in why so many women take a ‘the show must go on’ approach. Quite simply, when you have a miscarriage, you don’t know what’s normal, because we don’t talk about it.

For this reason, I, for one, am incredibly grateful to women such as Stella Creasy and Alex Jones for being so frank about their experiences. Because without these conversations, all our keeping calm and carrying on risks giving the impression to other women that a miscarriage is no big deal.

There are signs things are slowly changing. In New Zealand, a bill is making its way through parliament so that miscarriage is clearly included under laws governing bereavement leave.

If the amendment goes ahead, a mother and her partner will be entitled to three days of leave after a miscarriage — at any stage in pregnancy.

Jane Brewin says: ‘What I would love to see is a time when people can say to their employer: “I’ve had a miscarriage, I can’t come in today,” and the employer would automatically say: “Please take whatever time you need and let us know if there’s anything we can do to help.” That should be the default response. There is no one-size-fits-all.

‘For some people it might be right to try to get back to normal as quickly as possible, others might need several weeks — or longer.

‘But more than anything, we have to start to change people’s perceptions of miscarriage. At the root of all this — the reason women feel they have to carry on as normal — is the fact it’s still seen as a trivial thing.

‘And that’s the headline here: it may be common, but it’s not trivial.’