‘Is it good news?’ My mother-in-law’s friend is smiling at me – and at my still swollen stomach.

This is a common question in my community. From the moment a girl gets married, the next thing people will ask is whether a baby is on the way. Straightaway: ‘Any news?’ ‘Is there any good news?’

There is a real expectation that you will have children.

It wasn’t good news. I was attending a family friend’s henna party – which is a beautiful pre-wedding celebration, full of colour and drums – but I’d only recently come out of hospital after a late miscarriage, at 13 weeks.

I knew I was still showing a little (I’d had a visible bump from 9 weeks). I’d been in hospital for a full week, as I’d developed sepsis after the bleeding had started. I then had to wait another two months after the infection had passed before the consultant could safely do a D&C (a dilation and curettage, a surgical procedure in which the cervix can be scraped to remove abnormal tissues).

I tried to brush her comment off, to wear it lightly, but I also wanted to be as honest as I could. ‘Aunty, sadly it’s not… I just recently… I had a loss… Please pray for me.’

Miscarriage, stillbirth and infertility are still such taboos in our community. It’s not something we really talk about openly, even amongst women. Even within my own family, my mum has sometimes told me to stay quiet about what’s happened.

‘Just don’t talk about it.’ 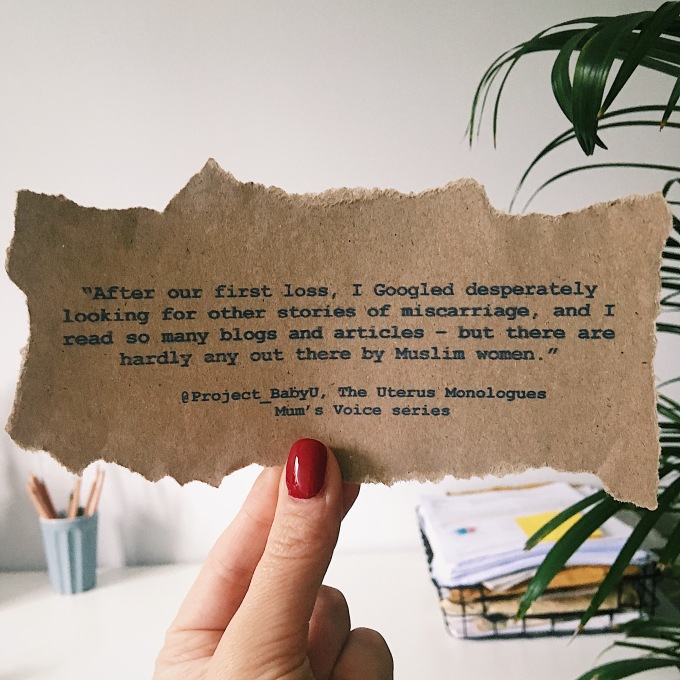 I didn’t know very much about miscarriage before it happened to me. I was pretty much oblivious.

When we first found out I was pregnant, I’d wanted to tell everyone. After all, we were going to be parents – it was a blessing!

My husband felt we shouldn’t say anything until after 12 weeks though, in case anything happened (he always says ‘there’s nothing to tell until there’s something to tell’). I know now that one of his friends’ wives had had a miscarriage that had meant she couldn’t come to our wedding, but back then I was so sure everything would be fine for us. I remember saying: ‘Don’t be silly, nothing’s going to happen.’

I was so naïve.

I did have some very light bleeding around six weeks, but a scan at the Early Pregnancy Unit (EPU) reassured us – the sonographer straightaway found a heartbeat. I couldn’t believe what I was hearing and seeing. It was the most beautiful sight and sound I had ever experienced. And my maternal instincts just kicked in from that moment. I was falling in love with my baby; I was thinking of names for my baby; I was imagining how we would announce to our families that we were having a baby…

We made it to the all-important 12-week mark, but at the end of that week something started to not feel right. I couldn’t explain it, even to my husband. There was no bleeding or outward sign anything was wrong, but I just started to feel numb and empty down there.

We were committed to a family dinner that Friday and had to drive up north. I felt on edge and uncomfortable the whole way. For those three hours in the car, I held on tight to a little tasbeeh (prayer beads) I’d been given by my late grandma, hoping the ‘feeling’ would stop.

Later that evening, during dinner out at a restaurant, the bleeding started. We had only just told my family our good news a couple of hours before.

Since then, we’ve had two more early miscarriages and been referred for tests. This summer we found out I have a heart-shaped uterus (septum uterus), which I’ve recently had surgery to correct. Our clinic doctors have said it is a possible reason for our losses, as if the embryo implants on the septum – a band of tissue which is dividing the uterus – it may not get the blood supply it needs to survive.

We’ve been through so much grief and anxiety. And most people who know us don’t know about it. Apart from our immediate families, after that first miscarriage, friends and family knew I’d been unwell and in hospital, but they didn’t know the real reason.

Afterwards, I bled for months and it was a constant reminder of what we’d lost. All this blood, these little bits, that kept coming, they were something; they meant something. And I needed to talk about it.

At one point, my mother-in-law did confide to me that many years before, my brother and sister-in-law had had a stillborn baby at 7 months. I think she was trying to give me hope, because they have beautiful living children now. I did wonder then whether my sister-in-law would open up to me about their loss, but she never did. She stayed quiet.

The silence around baby loss in my community is a cultural thing rather than a religious thing.

It comes from a deep-rooted sense of privacy in our culture. For example, although people are quick to question when you’re going to get married or when you’re going to have a baby, they won’t probe for details or ask whether there’s something wrong. When friends and family have fertility treatment, it’s kept private. And when a couple has a love marriage, people won’t necessarily come out and say that, instead it’ll be: ‘oh they were introduced’.

But miscarriage is referred to in Islam. The Prophet Muhammad’s (peace and blessings be upon him) daughter suffered a miscarriage. I didn’t know this before, but my mum told me after our losses and learning of it did bring me a kind of peace.

After our first loss, I Googled desperately looking for other stories of miscarriage, and I read so many blogs and articles, but there are hardly any out there by Muslim women.  (Although I did find this one just recently, and it was a great comfort.)

The silence seems so sad to me, because our faith has helped us in many ways.

Patience and a belief that you will be rewarded for your struggles is a big part of our religion. And knowing that we have three babies up in heaven waiting to be reunited with us gives me peace as well.

Indeed to Allah we belong and to Him we shall return
(The Holy Quran 2:156)

Likewise, when I was at a really low point earlier this year, I got some counselling through a faith-based charity, the Muslim Bereavement Support Service. After the first loss, work hadn’t been supportive at all, and I’d ended up leaving my job. We’d recently had another miscarriage and it was all piling up. I wasn’t myself. I’d become a person who couldn’t look at herself. I couldn’t get out of bed. I wasn’t the normal me; the me who loves fashion, cooking, travelling and socialising.

Despite the taboo that exists, whenever I have shared my story with other women I know, from the same background as me, the reaction has never been unkind or dismissive.

We are taught an Islamic saying for when someone dies – Indeed to Allah we belong and to Him we shall return (The Holy Quran 2:156) – this is often what people will say when I tell them about the babies we lost.

People also tell us they will remember us in their prayers, which helps. For instance, when a woman goes into labour, we believe that because this time is so precious and because the woman is going through so much pain, the angels come and whatever she prays for during that time, those prayers are delivered straight to the Almighty to be answered. Many pregnant friends have said they will pray for me and my husband.

Occasionally, women have opened up to me with their own stories when I tell them about our losses, too. Stories of infertility, IVF, endometriosis, miscarriages…all the things that happened behind closed doors before they had their children.

It’s so important to me to hear these stories. Every time, it reignites my confidence that we will have a baby one day. When people do share, you can see hope for your future. Whether it’s been a cousin, an old school friend, or the wives of my husband’s friends, they’ve all told me the same thing: ‘Don’t give up.’

I hope by being as honest as I can, it might make people question their attitudes around having children and loss and all those unthinking questions that we ask. And one day – whether it’s in two years, five years, or ten years – I hope this taboo will finally be broken.